Two! TWO! Two posts in one!

So I woke up yesterday with tons to do. A baby shower to attend, a gf coming over early evening and another crafty friend coming over to play after dinner.  Instead, I woke up feeling AWFUL - congestion, lil fever, etc.  So I had to cancel the first two events (I'm not getting a pregnant person sick!) and around 8:30 Christie came over (my crafting twin)  and boy did I have a surprise for her!

Hubby hates when I'm sick - he's a very sympathetic nurturing caring guy - I'm so lucky!  I was whining about having to put up another table for Chris to play on and wishing I had one of those fun door/shelf tables so many gals are making - next thing you know - hubbalicious went to the Depot and made my wishful thinking come true!  You saw the post yesterday I won't bore you with more details. I'll bore you with other shiz.

ok so Chris and I had a great time until 2am playing around.  I got the Melamine tape for around the table so you don't have that rough crap - she spent the first hour ironing that on while I bossed her around.  Then she played with the new Pazzles and I was working on projects for this week's posting.

Today you get TWO posts in one cause the project I did for tomorrow is so craptastic that I decided to not even waste video on it and just snap a pic - here ya go! 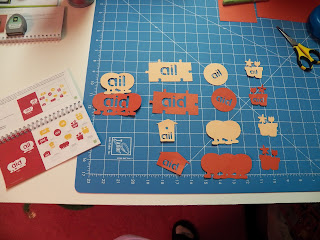 A garden of Words - This is a Classroom Cartridge so it does not have a project in the binder.  I went to the very first page and did all the cuts on that page.  They were so crapful I didn't want to waste a piece of 12x12 to glue them on. I'm not sure why I bought this cartridge.  Maybe it would work out for a early education teacher, but not a good addition to a scrappers/crafters collection that's for sure.  What cha think? 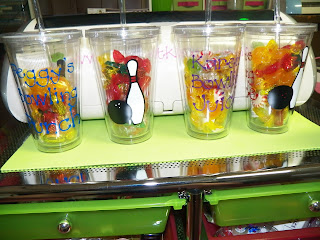 This next project was fun!  I was going to make the Karen's on our bowling team a cup for their adult beverages they bring every week (on left) they turned out so darn cute I made another set for a friend and her husband (on left)  These were svg's and I used Make the Cut to cut the vinyl.  Filled the cups with candy and waahlaaa - instant cute gift.  I do kinda wish I  had done a shadow layer for the names but ahh they are cute none the less.

See ya tomorrow with the project from All Sports - LOVE this cartridge!