I know it has been almost 6 months since my last post and I apologize.  I've had a lot happen in that short time, somethings I can share, some not.  I'll talk about it in a later post.

Right now I'm excited to share with you my Rhinestone Project.  I was a little hesitant to try it out and I certainly didn't want to pay 30 something for the 'kit'  Let me share what happened.

A few weeks ago I pounded out almost 50 t-shirts for a fundraiser for my dear friend who was battling colorectal cancer. I got tons of positive feedback on the shirts so I want to make more, dress up some t-shirts I have. The benefit was a massive success, unfortunately Darlene lost her fight on Saturday.  I also made tons of kisses and bar wraps for the volunteers and will post about that later as well.

I have a few t-shirts in a basket that I was going to fiddle with 'someday' with vinyl.  After the feedback I got from the t-shirts for the fundraiser I just had to try some more t-shirt fun.

I'm rooting around, looking at my vinyl and suddenly remembered I had a rhinestone kit for my Pazzles that I won at a gathering.  I took it out and looked it over.  Then I looked at a video or two on Youtube and finally figured I'd dive in.

First I selected a design from Silhouette Store a simple flower.
I then took the backing off the foamy rhinestone material that came with the kit and laid it sticky side down on my Cameo Matt.
I cut the design (careful to choose the rhinestone setting) and it came out beautifully. 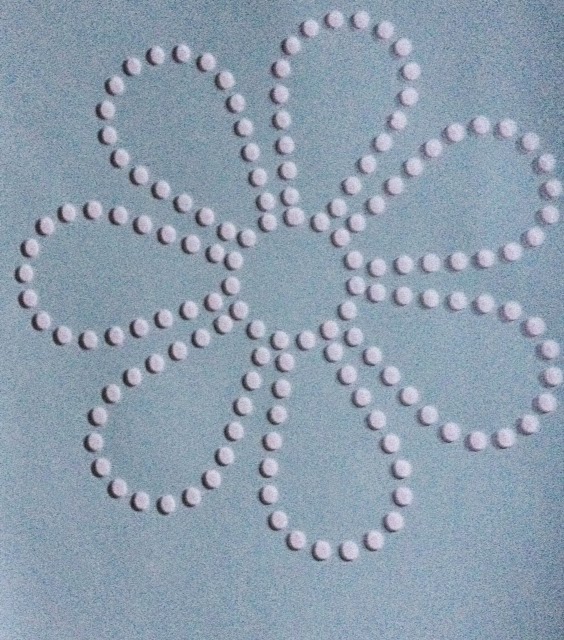 Now - you are SUPPOSED to use some kind of backing board. I didn't have one. I had the foamy sheet and an iron on sheet.  So I improvised.  I used a cuttlebug plate for my 'backing sheet'  It worked BEAUTIFULLY

I then poured on the rhinestones and slid them into the stencil (foamy material)  I only had to flip a few to put them in correctly.  The correct way is SHINY side up, glue side down.

Then I took a sheet of the iron on material and cut it a smidge larger. Peeled the backing and laid it on top of the filled in stencil.  Then I used my scraper to go over it to make sure the rhinestones adhered to the sheet. (just like you would use for your vinyl projects to smooth out bubbles)  Pull the sheet up and waahla! Ready to iron on.

I used my regular iron on the steam setting (with no water inside cause it's the hottest) placed one of my husbands handkerchiefs and ironed it for maybe 30 seconds.  Let it cool and peeled.  PERFECT. 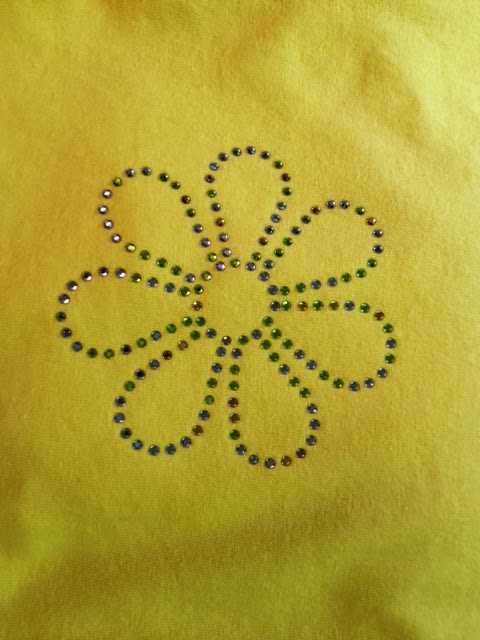 I absolutely love it.  I was thinking things over (I do that once in a while) and decided if a stone or 3 fall off at any time, I can fix it with my I rock.  Super simple yes?  These rhinestones are 10cc.  Research has told me that you want to use 6cc - 10cc for rhinestones that adhere nicely and can stand washing. Apparently larger sizes are more difficult.  These are just sample rhinestones I got with my Pazzles Kit (but used with my cameo) and I really like how it turned out.  Best part? You can reuse the stencil over and over. Just put the backing back on the sticky side and store. Cause you know, we don't have enough supplies to store (dramatic eye roll).

I recently purchased a big selection of iron on vinyl and now I think I'm going to track down some more of the rhinestones as I am super pleased.  Let me know what you think. Have you done any rhinestone projects?