My Cricut buddy Michelle from www.scappinwithmybug.com loves a deal and brags about it whenever she finds one.  This turns into many of us spending dough on stuff we didn't know we HAD to have.  She is the queen of good deals in paper crafting.  She's also brilliant with her designs and has been published in Cricut Magazine and her stuff is on the Cricut commercial - how awesome is that?

OK, so a few days ago she was bragging on Facebook about a Creative Cutting Center that she got on clearance at Joann's and how it was even cheaper cause she used the 20% off teachers coupon thingy.  Blah Blah whatever Blah.  Yes, I barely paid attention. Not because I'm not interested in what she has to say, I'm VERY interested.  It's because I made a new year resolution to not spend as much and to use what I have. 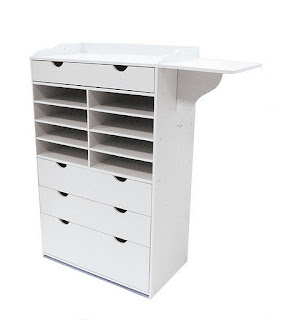 But then a few girls started getting excited cause their Joann's had the Station and they got the same deal.  So this morning I call my Joann and they said they didn't have them. So I gave them the item # and they checked the computer and WOOT! They have TWO.  I purchased them right over the phone and will pick them up later.

How awesome is this?  So go to www.joanns.com and look at the store locations for a phone #.  Call your Jo's and ask if they have any of item #02427102 in stock.  They will not hold it for you, but they will take your payment over the phone and you can pick it up later.

Let me know what you think?